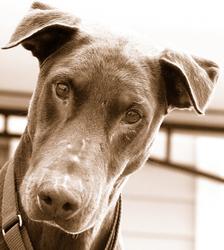 - Raising funds to sustain our mission. Every penny of every donation will go to Dobermans in need!